Believe it or not, one of the few Baltic Sea meteorite craters is located in the shadow of a small island Osmussaar in Northern Estonia. It is called the Neugrund crater. This hidden gem induces discussions between different interest groups, including the state, renewable energy companies, scientists, locals, tourism operators, guardians of the island, conservationists, tourists and others.

Discovered only a quarter of a century ago, the 535 million years old underwater meteorite crater is the largest and oldest in Estonia. It is considered one of the best-preserved shallow sea craters in the world. The crater is completely underwater and largely filled with sediments. The initial depth of the crater has been proposed to be more than 500m, currently the measured depth is 40-70m. The asteroid that fell into the sea was about 0.5 km in diameter. Extremely powerful explosion created a giant crater surrounded by a wide ring wall (2.5-3 km) and a ring-shaped upheaval (Ø 20-21 km) that bounds it. The diameter of the crater, measured from the ridge of the ring wall, is up to 9 km. 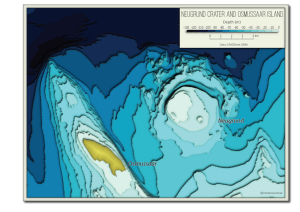 In the centre of the crater is the Neugrund lowland, with only 1-10 m of water above it. This limestone plateau is surrounded by a semi-circular canyon 30-70 m deep and 200-500 m wide.

For various reasons, there are many interested suitors revolving around the Neugrund crater area. Each of them has their own interests and goals, justifications for their actions and objections to the actions of other suitors.

For example, a private company prepares to build an offshore wind farm on the Neugrund plateau, the capacity of which is calculated to cover nearly 20% of Estonia's energy needs. However, almost fifteen years of dealings with state structures have not resulted in the necessary approvals for construction. A wind farm with up to 38 wind turbines is planned for the Neugrund plateau, about 10 kilometres from the coast. However, the technology has developed rapidly over the delayed years, and it would already be possible to build a wind farm with an initially significantly higher capacity.

For divers, the Neugrund crater is like a small paradise in Baltic Sea – the low plateau and steep depressions create opportunities for both hobby divers and serious researchers. Many diving companies in Estonia offer more experienced divers the opportunity to explore the underwater landscape and geological formations that are over 500 million years old.

Conservationists also value the area and consider it necessary to establish a protected area on the Neugrund lowland in order to preserve its uniqueness and integrity, as well as the complete ecosystem of the area's marine life and bird habitat.

Furthermore, the Neugrund lowland is of significant importance from the point of view of national defense. To be precise, the area overlaps with the areas defined as a special area of national defense, which are formed to conduct air defense, artillery, naval or other types of exercises.

The small Osmussaar, located 8 km from the mainland and in the neighbourhood of the Neugrund crater, offers geologists a great joy of discovery. Of particular interest are unique breccia rock and the bedrock exposed on the bank at the northwest end of the island, where many fossils can be found. 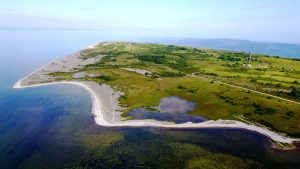 In addition to geologists, Osmussaar also offers a worthwhile discovery and sight for both bird researchers and bird watchers. The island has diverse habitats suitable for different species, the lagoon lakes in the southern part of the island are especially rich in birds. 158 bird species have been registered on the island, nearly 90 of them nest on the island. The birds that pass through Osmussaari are also rich in species, especially in Arctic species. 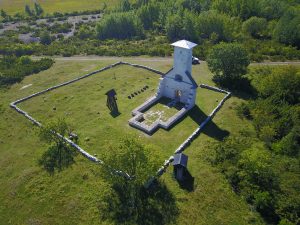 The settlement history of Osmussaare dates to Viking times.

The first written mention of the island was made in 1250. Among the cultural monuments, the limestone chapel of the coastal Swedes (1765), the threshing floor and the ruins of a barn have been preserved.

Osmusaar is believed to be the tomb of the mythological Odin. Both the island's name (Odensholm means Odin's grave in Swedish) and the Odin's boulder (Odinstain) that was blasted by soviet army indicate this. According to legend, Odin was buried on the island under this boulder after Ragnarök.

In recent years, Osmussaare has also been discovered by tourists who enjoy and appreciate nature. Day trips to the islands are offered by several companies, the boat captains and guides are former coastal fishermen who know both the sea and the island like the back of their hand. While waiting for the ship or returning from the island, the sea view can be enjoyed at the port restaurant in Dirhami.

One small area, yet many stakeholders interested in the development of this coastal area. Comprehensive development of the destination requires meeting the expectations and needs of all interest groups in the best possible way, and conscious cooperation and management. Natural values have to be protected, but it is also important that the region is also economically wealthy, and liveable for the locals. If the liveability of the place suffers and decreases due to meeting the needs of some interest group and benefiting from it, then this loss must be compensated to the locals.